While the exact procedure for breaking-in a new or freshly rebuilt engine may differ from one engine builder to the next, one thing is for sure; nothing sucks more than getting a fresh build between the frame rails only to run into an issue that requires pulling the engine right back out.

Luckily, that is why engine test stands were created. By allowing an engine to be run outside of a vehicle, potential issues can be identified and easily addressed before the engine is reinstalled into a confining engine bay. The ability to test an engine outside of a vehicle is a serious advantage for everyone from professional engine builders to the home hobbyist.

Unfortunately for the home hobbyist, buying or even building a test stand can appear to be an expensive, daunting task. Also on the mind of professionals and home hobbyists alike, is the issue of space. Storing a relatively bulky piece of equipment that isn’t used every day can pose some challenges regardless of shop size.

Thankfully, PRW has addressed all of the above concerns with their line of Engine Test Stands. Easy to assemble and use, the PRW stands will fit a variety of engine types, and solve the space issue by breaking down when not in use. By offering a modular and affordable test stand, they are bringing down a lot of the barriers to entry faced by the average builder and professional alike. 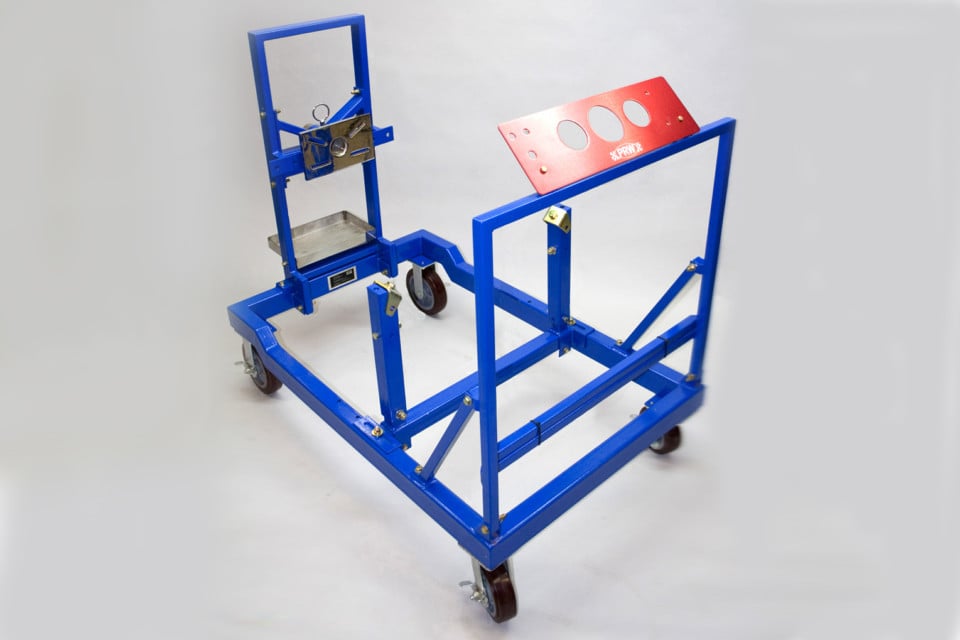 The PRW Engine Test Stand is available in a number of configurations, ranging from bare-bones to fully accessorized. Also available is the rotating short-block adapter, which can be seen here at the rear of the stand. That allows the test stand to be used as an engine stand for short-block assembly as well.

Part of the ingenuity of the PRW Engine Test Stand is the unit’s modularity. It’s available for purchase as various models ranging from a bare bones “Base Unit” all the way up through a fully outfitted test stand that comes with trick bells and whistles right out of the box.

All of the units are made from a robust 1045-alloy steel square-tube, which offers strength and durability, with a maximum payload of 1,200-1,500 pounds. “That is more of a caster limitation than a limitation of the frame though,” says PRW’s Shaun Snow. “It was designed from the beginning to be collapsible. The idea was to allow people the flexibility to easily store it out of the way when not in use.”

When collapsed, the test stand comes in at about the footprint of a few folding tables, stacked, measuring only 40 inches long by 32 inches wide, and 20 inches tall, for those who are in space-limited shops or home garages. “I have been to several small engine builders shops and floor real estate is always at a premium,” Snow says. That holds doubly true for the home hobbyist who might be working out of a garage spot which is normally reserved for the daily driver. PRW offers height-adjustable legs in addition to the solid front mounting legs, allowing you to adjust one set of legs to various engines, as opposed to swapping out legs altogether.

Four locking casters allow the assembled test stand to be easily moved about the shop even with a fully dressed engine mounted, and each model comes with a pre-fabricated aluminum battery tray and instrument panel. In the base version, the instrument panel is still anodized and laser-engraved, but is left undrilled for your own choice of gauge sizes and layout.

The rear and front engine mounts are adjustable to fit a wide variety of engine families and configurations, with both fixed and adjustable front engine mount uprights available. “The stand was designed to be universal, so while traditional V8 engines will be the most straightforward to mount, we have seen a wide variety of engines from the Cummins diesel to V10s,” Snow explains. “The mounting pads are pretty universal.” The stand is designed to have clearance for most standard headers, so you won’t need a special set of headers just to run the engine on the run stand. We used these Hooker headers on our BBC for the Horsepower Wars 10K Drag Shootout.

Out of the Box Accessories

For those who prefer an all-in-one, ready-to-go solution, PRW has you covered, with an “accessorized” unit which includes all of the ancillary parts needed for the stand to operate. While previously, collecting and assembling all these parts could be one of the daunting components of getting a test stand up and running, with the accessorized option from PRW, it’s as simple as using a box cutter and reading directions.

Probably the most noticeable upgrade of the accessorized stand is the included radiator and 14-inch electric cooling fan. Designed to have plenty of cooling capacity to keep engines at operating temps when running on the stand, the high-efficiency, curved-blade fan moves significant amounts of air through the stationary radiator.

Also included, as of the past year, is PRW’s fabricated aluminum overflow tank. A 3-inch diameter, 8-inch long cylinder with fittings to plumb into the radiator and mount on the stand, the overflow tank helps prevent boiling over and keeps air out of the cooling system, keeping it as efficient as possible. The overflow tank was previously an optional upgrade, but now comes standard. PRW’s fabricated coolant overflow tank is a really nice piece and is included with the radiator and electric fan in the accessory package. Not only does it help prevent coolant from boiling over, but it also looks pretty dang nice on the stand as well.

Also included in the accessorized package is a fabricated aluminum fuel cell. With a 2.5-gallon capacity locking cap, and mounting flange, the fuel cell is built specifically for the PRW engine test stand. It comes with feed and return bungs pre-welded for easy connection to the engine’s fuel system. Whether you buy the barebones kit, or a fully accessorized stand, the PRW fabricated aluminum fuel cell is a must-have. The 2.5-gallon cell is engineered to fit perfectly on the stand, and really takes a large challenge of constructing a run stand out of the equation. With it’s locking fuel cap and pre-welded feed and return bungs, it’s about as ready to go out of the box as you can get.

With the optional rotating short-block adapter kit, it allows the run stand to function as an engine stand, allowing an engine builder to build the short-block right on the engine stand, and then swap over to the standard mounts to attach the flywheel or flexplate. Also if attaching the flywheel isn’t critical, you wouldn’t even have to swap to the standard rear mounts. “The short-block adapter could be used to run the engine as long as you don’t need to run the engine with any flywheel or flexplate,” explains Snow.

Whether you opt for the blank canvas or the pre-accessorized version, there is plenty of room for you to put your own personal touches on the stand. “The frame has plenty of space for people to customize it in any way they would like,” Snow says. “People should feel free to drill and mount whatever they like to the stand. The stand was envisioned as being a blank canvas that the end user could custom tailor to their exact needs.” Since we opted for a fully accessorized kit, it came with 2-5/8 oil pressure and water temperature gauges, along with an 8,000-rpm tachometer, and the needed switches. Another time saver is that with the accessorized package, the instrument panel is pre-drilled for all the gauges and switches, only leaving the wiring to you.

For someone who may have both EFI and carbureted engines coming through, mounting both a low-pressure and high-pressure electric fuel pump, along with the associated pressure regulators on the frame and controlling them through a switch on the instrument panel could be an easy solution.

With plenty of room on even the pre-drilled instrument panel, you could even add a wideband oxygen sensor to make baseline AFR changes before the engine goes into a chassis. Really the combinations and potential modifications are limited only by your imagination.

With the PRW Engine Test Stand, you can have a mostly blank canvas for a DIY run stand project, with a majority of the heavy lifting already done for you, or complete workstation ready to go out of the box. Either way, you get a useful tool that is also conscious of taking up space when not in use. Besides being mobile thanks to the built-in casters, the whole unit folds down into a compact 40-inch by 32-inch footprint, which is only 20 inches thick. Even in physically large shops, floor space can be at a premium, and that was something PRW was cognizant of when they designed this run stand.

Holley Gets Us Up And Running Once you get the test stand assembled, there are still a few things you’re going to need, aside from the engine itself, that is. For our project, we turned to our friends at Holley to outfit our stand and test engine with the remaining needed parts.

The famous Holley Blue electric fuel pump will provide plenty of fuel for anything with a carburetor that we put on the test stand, while only drawing 3 amps. With it’s long service life, we shouldn’t ever have to worry about needing to replace it. Plus, it comes with a regulator capable of 4.5-14 psi with a single inlet and dual outlets.

The pre-bent feed line fits the 4150’s 9.313-inch center-to-center fuel inlet distance perfectly, and comes with the required 5/8-18 inverted flare fittings to bolt right up to our carb.

This carburetor has features from Holley’s race-series 4150 carbs, but in a milder street version. With mechanical secondaries, screw-in air bleeds, four-corner idle air control, dual accelerator pumps, and dual fuel inlets, it has all the features you want on a performance carb.

Made from ceramic-coated 16-gauge steel with 2.0-inch mandrel-bent primaries and a 5/16-inch header flange, these tuned-length primary tubes are ideal for street engines, are a perfect fit for our big-block Chevy test engine.